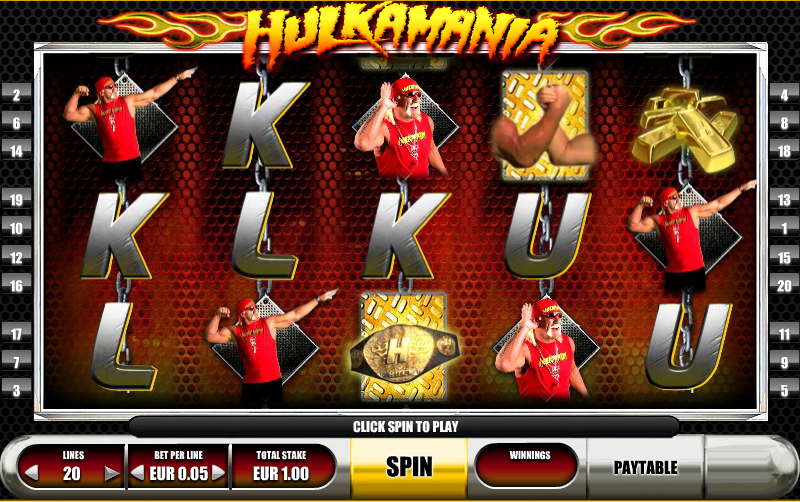 Endemol games released in early 2012 Hulkamania – a great looking, state of the art slot game inspired by one of the most iconic wrestler in history – Hulk Hogan. With new and interesting features, exciting gameplay and great side games this slot is a great choice, not only for wrestling fans, but for all players looking for a fun way to win big prizes.

This is a 5 reel 20 paylines slot game. It allows you to bet from as low as 0.01 up to 5 Pounds a coin. Since you can only bet one coin per line this means that a maximum bet for this game is 100 Pounds per spin. The biggest jackpot you can win in a regular game is 1.000 coins, or 5.000 Pounds when playing at maximum stake.

Hulk Hogan is the wild symbol of the game which can replace any symbol except the scatter and the bonus symbol. There is also a Golden Wild symbol in the game. When you hit it anywhere on the reels it will replace four random symbols with Hulk Hogan symbols boosting your winnings with great additional prizes.

Bonus games on the Hulkamania slot

The best thing about Hulkamania are the great bonuses which can be won in two different side games. The first game is the Big Fight bonus, which can be triggered when you hit three Title Belt symbol but only on reels 1, 3 and 5. You are then taken to another screen in which you get in a wrestling match as Hulk Hogan. You get to choose fighting moves that either Hulk or the opponent carries out. Your prize depends on the outcome of the fight. If you like the sound of this game you should also take a look at the Rainbow Riches slot.

The other bonus game is the Arm wrestling game, which is triggered when you hit the Arm Wrestling symbol on reels 3, 4 and 5. Again you are taken to another screen but this time you get in an arm wrestling match against the Hulk. The more good moves you hit the more free spins you get. After the match you get to play your free spins during which all your winnings are doubled.